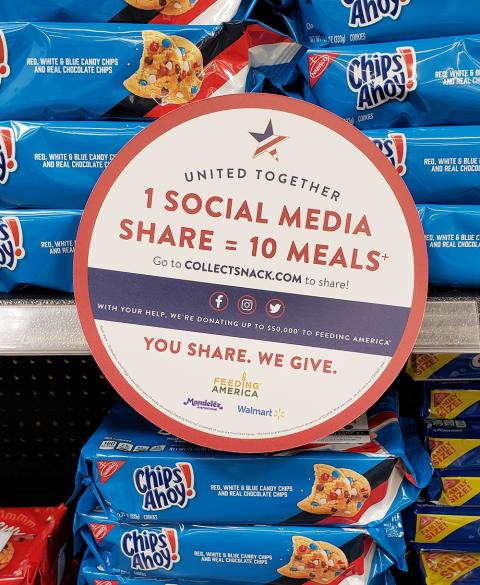 Mondelez International brought back a collect-to-win game with a cause component to Walmart this summer amid the COVID-19 pandemic.

The cause component served to extend the promotion’s reach via social media by asking consumers to share the specially marked packages on Facebook, Instagram or Twitter. In stores, the custom SKUs were merchandised together and flagged with “United Together” shelf signs telling shoppers that each share will trigger a $1 donation to Feeding America. Mondelez guaranteed a minimum donation of $10,000 and capped it at $50,000.

Mondelez has staged similar promotions at Walmart for at least the last two years, though this seems to be the first time Belvita has participated. Last year’s effort ran from Aug. 25 through Nov. 1. The instant-win component awarded 1 million $5 Vudu codes (Walmart had since sold the streaming platform to NBCUniversal’s Fandango division, which will continue operating Walmart’s digital movie and TV store on walmart.com) while the collect-to-win portion awarded $10,000 Walmart gift cards to 10 winners and $1,000 store gift cards to another 1,000 winners.