Target has been stoking excitement for licensed toys and collectibles through a periodic “Geek-Out” program that celebrates fandom and creates an aura of exclusivity around the products to drive demand.

The Summer Geek-Out offered new or rereleased exclusive SKUs throughout July. Shoppers could preorder one of each collectible beginning at 8 a.m. CST the day of each release on a dedicated "The Collector's Spot" e-commerce hub within target.com. The event included toys from Hasbro’s G.I. Joe and Marvel "Legends," as well as McFarlane Toys’ Batman classic TV series collection. A July 6 Tweet touted the campaign.

A Fall Geek-Out campaign running Sept. 3 through Oct. 3 again introduced new exclusives each week. The products included Transformers and licensed Star Wars collectibles from Hasbro, as well as Stranger Things and Marvel "Through the Ages" licensed figurines from Funko. In stores, an endcap outfitted with a Fall Geek-Out header stocked various collectible SKUs from Funko, McFarlane Toys and Hasbro.

Comic book artist and McFarlane Toys founder Todd McFarlane promoted the event with a Sept. 2 Facebook update spotlighting an exclusive "Gold Label" Batman figure from the Batman: Year Two comic that became available via The Collector’s Spot on Sept. 3. The e-commerce hub also hosted a behind-the-scenes video from McFarlane touting the inclusion of a signed card in 1,000 of the SKUs.

Target saw a spike in toy sales in its first quarter of fiscal 2021, which ended May 1, and has been working to bolster the category by pursuing exclusives from brands including Mattel’s Fisher-Price, Lego Harry Potter and Jakks Pacific. 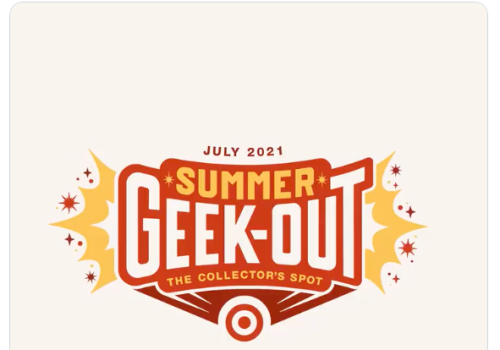 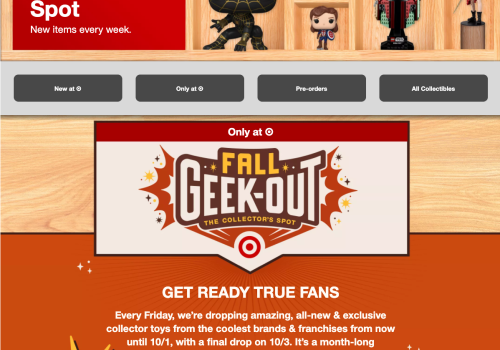