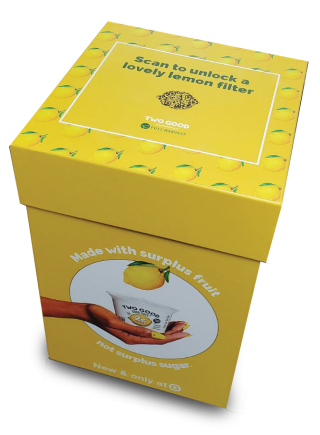 Danone North America’s Greek yogurt brand Two Good sent influencers lemon trees in the spring to drum up support for its new line of yogurt made with rescued produce.

Created to help tackle food waste, the Good Save line is made with imperfect or surplus produce through a partnership with Full Harvest, which runs a business-to-business online marketplace dedicated to this specific type of produce. The line’s initial offering was created using Meyer lemons that otherwise would have been wasted due to overproduction, a lack of secondary markets for the farmer or cosmetic blemishes. Target enjoyed an exclusive launch window for the product, which rolled out to the mass merchant’s stores and Target.com in December 2020, and nationally in May 2021.

Two Good and shopper agency TPN teamed up with influence company Acorn to send influencers branded kits that included a Meyer lemon tree, a cookbook with a focus on reducing waste and reusable items, such as beeswax paper for food storage, spoons and bowls. The kits reached 10 influencers from March 20 through April 20 and, beyond delivering sustainable goodies and trees, communicated that the SKUs were “new and only” at Target.

“Our goal with the kit was to bring our mission of reducing food waste to life, and share simple and easy ways the [shopper] can reduce food waste at home,” says Danone North America’s Erin Anderson, senior director, field shopper marketing and e-commerce. “This delightfully interruptive gift not only provided a fun surprise when recipients opened the box, but it gave them a roots-in-the-ground — or pot — example of the very thing we are supporting. This made for a fresh and inspiring series of unboxing videos from our influencers who helped spread the word about food-waste reduction.”

The kits were part of a 360-degree program that considered the entire shopper journey with a focus on reaching shoppers on- and off-platform, Anderson says. Running from December 2020 to May 2021, the program included:

• A brand showcase on Target.com that spotlighted the new SKU and shared video and educational content on food waste and Two Good’s partnership with Full Harvest;

• Paid search, on- and off-platform display ads, ads on Pinterest and Snapchat, and influencer engagement via Target’s media network Roundel;

• A feature in the retailer’s March 6 circular.

The target shopper was the “health conscious do-gooder,” who Anderson says is ambitious, lives by their values and has a holistic approach to health and wellness. Identifying the shopper insights that helped the brand’s strategy, Anderson says that the brand knows shoppers “are interested in products that help protect the planet and are looking for the products they buy to have an impact on their health and the health of the planet.” 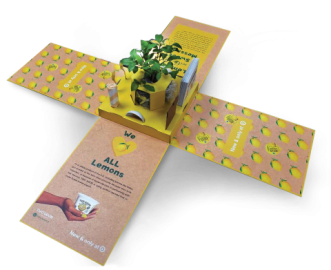